They have dominated the Dutch flamenco scene for years and are making their mark in Spain too, but this is the very first time they will be sharing a stage. FBN asked Tino van der Sman and Arturo Ramón to put together a program for the festival’s 8th edition with their love of the flamenco guitar as its theme. They invited up-and-coming talent Joes Wieggers for the occasion. Like Tino, Joes lives and works in Spain. Van der Sman graduated from the Rotterdam Codarts University for the Arts in the year Joes was born. Arturo Ramón graduated from Codarts in 2003 and has been a teacher there since 2020. Strings and styles of three Dutch flamenco guitarists will combine in what promises to be a memorable guitar recital: Guitarra Pura. A warm-blooded night for the enthusiasts! 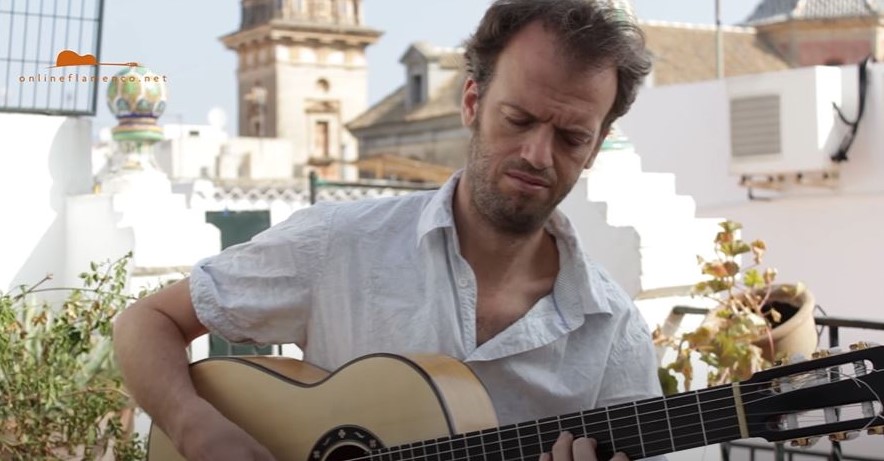 Tino van der Sman has been living in Seville since 1999 and has become an integral part of the Andalusian flamenco scene. As one of only a few foreign guitarists, he has built a reputation as a dance accompanist, sharing the stage with such dance greats as Israel Galván, Ana Morales, Úrsula López, Isabel Bayón, Pastora Galván and Antonio Canales.

He has performed at the Metropolitan in New York, the Concertgebouw in Amsterdam and the Queen Elizabeth Theatre in Toronto. As a studio musician he has recorded with Estrella Morente, Jorge Pardo, Sal Marina, Arcángel, Rocío Márquez and many others. Lately, Van der Sman has turned to classical music, finding inspiration in Messiaen, Schönberg and Debussy. He is currently working on new compositions which explore the atonal possibilities of flamenco.

Arturo Ramón was born in The Hague in 1981 to a Dutch mother and a Spanish father. At the age of 11 he took up the guitar and at 15 he went to the Royal Conservatoire in The Hague to study classical guitar.

Soon after, he came into contact with flamenco and he has devoted himself to the flamenco guitar ever since. In 2003 he graduated from the Rotterdam Codarts University for the Arts, before becoming a teacher there in September 2020. In 2008/9 he and his wife, the singer Ermínia Fernández Córdoba, toured with the Internationaal Danstheater company. In 2011, during the third Flamenco Biennial Netherlands, he played works by modern composers Florian Magnus Maier and Mauricio Sotelo with the Nieuw Ensemble, conducted by Ed Spanjaard. Arturo Ramón has more than won his spurs in the Dutch music scene. His virtuosity and sense of rhythm and melody make him one of the most complete guitarists in the Netherlands.

Since Joes Wieggers, born in Eindhoven, went to Málaga when he was 18 to immerse himself in flamenco guitar music, he has been known as ‘El Tuli’ (Tulipán - Tulip). He studied with Paco Peña at Codarts in Rotterdam and at Conservatorio Superior Rafael Orozco in Córdoba.